From Musipedia
Jump to navigation Jump to search

In a major key, chord number two tends to be a minor chord. To explain, let's look at the scale below:

Chord II in a major key is a minor chord. This is because the note which tells us if a chord is a major or minor (the 3rd) in this case, is a minor 3rd.

Look at the scale of C major. We already know that chords 1,4 and 5 are major chords because they contain major 3rds. Chord 6 is a minor because it contains a minor 3rd.

When we play the above chord with the D as the lowest note, we say that it is a D minor chord in root position.

If we moved the position of the chord so that the F was the note at the bottom of the chord, and the other two notes (in this case A & D) were on top, we would say that this is a D minor chord in 1st inversion.

Chord of C(I) and 1st inversion 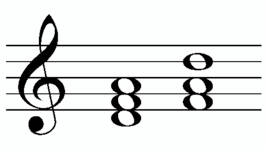 Chord of Dm(II) and 1st inversion


How to form and play inversions of chords